Can Tony Anthony speak Chinese, as he failed to read some Chinese script that was presented to him?

Yes.  I have heard him speak Chinese.  On the spur of the moment, my daughter and I asked him to speak to us in Chinese, without giving him any prior warning or prompting. Though Tony told me it wasn’t very fluent, it was spoken quickly, smoothly and with the high throaty inflections and sounds I hear from people whose native tongue is Chinese.  If I hadn’t watched him speak I would have assumed I was listening to a Chinese person speaking. Tony shared that much of his time in China was spent training in Kung – Fu (6-8 hours a day).  It is understandable he will not have retained exhaustive knowledge of the thousands of complex characters, which comprise the written language. References have backed up that he has communicated more than adequately when giving basic greetings to Chinese communities in the UK, Singapore, Malaysia and in Hong Kong. Click here to view a scan of:

Tony mentioned writing calligraphy nameplates in prison.  It seems this has been widely taken to mean he created artistry using Chinese characters and symbols.  He was taught how to write/draw Chinese calligraphy as a child (see page 35) and he has used some of this in his public presentations.  Tony told me the calligraphy he used in Nicosia Central Prison was Western and Roman script (see page 133). click here to view a scan of: 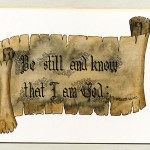 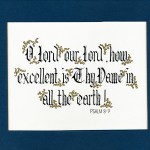 Finally, it is over 30 years since Tony lived in China.  It is clear his primary purpose for being there was to learn and develop in Kung Fu.  Literary education was not the main feature of his days.  I do find it reasonable when he says he has forgotten the meanings of many of the characters he saw and used when he was in the country.  I have found from my own experience that people have a tendency to forget lessons taught at school if the information given is not used on a regular basis eg mathematical equations/formulae and languages.